Goal/Purpose: To hike to the summit of Old Speck Mountain, camp overnight and attempt a Summit on the Air contact (SOTA) radio contact.

Gear: Due to the warm temperatures (low 80’s), shorts and t-shirts with trailrunners were worn.  Pack weight ~22#’s, and included extra radio gear.

No major gear malfunctions. I did forget the proper charging cable for the solar panel so I was unable to test it in the field. In the future, I plan on having a dedicated cable for the panel.

Foam ground pads, while useful for pack stiffness, lead to body stiffness after a nights sleep on a wooden platform. I will be upgrading to a Exped UL7 inflatable pad in the future. Also, while I love my Six Moon Designs UL pack, more storage for radio and winter gear is needed. An Osprey pack may be my alternative pack for the winter.

While on the trail, a sudden emergency led to copious amounts of shop towels (TP) being used. While we didn’t run out, we did have soap and water on hand if needed.

The problem corrected itself, and no OTC medicine was needed (though available in the first aid kit).

Purifying water with my SteriPen Ultra

New water bottles are needed. I repurpose Gatorade bottles as they are stout, have a wide opening (good for cold temperatures and fit my SteriPen), are cheap and easy to replace. My current bottles are from the summer and I like to replace them every six months. Another simple but incredibly useful modification would be to mark my titanium pot to indicated measurements. While I often just eyeball it, it would be nice to have accurate amounts.

Food consisted of trail mix, Krave Jerky (you will never eat any other jerky again, this stuff ROCKS!), fruit and Cliff Bars.

The Ti spoon, while plenty long enough to reach into Ziploc bags of food, has a terrible feel in your mouth. Something about the curvature of the spoon and metal texture I find really annoying. Bamboo spoons are on order.

For my handheld 4 Watt VHF radio, a compact radio charger is needed for field charging. Also, I need to construct a new YAGI antenna for better reception and transmission. While I used a whip antenna, I had a hard time picking up signals. So using my hiking poles I made a quick field expedient hanger for my J-Pole antenna.Of course, a steel tower next to the J-Pole wasn’t doing it any favors. APRS was also activated, however I suspect I never made it into the local digipeater due to low wattage and the remote location.

To activate a summit, you have to make a minimum of four contacts at the summit. I was able to make five contacts thus activating Old Speck. I would like to thank the following amateur radio operators for their contacts and helping me in the activation:

KC1APK-Colchester, VT  **He was the longest distance contact I made

While it was warm on the fire tower, it was extremely windy. Dedicated earphones would help reduce the noise.

Overall: A fun trip with minimal gear failures, great views, a ton of exercise, and a completed SOTA activation. 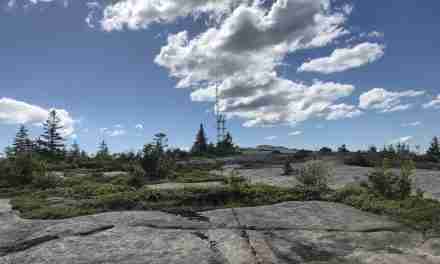 Now on SoundCloud with my SOTA activation recordin

White Mountains trip cut short due to me getting s

Trappin' at the KB1HQS trap house. Trapping the EF

Check it out! My new list of portable radio operat

Making progress..got the GPS to fire up but then r

My new ham radio badge. I promise to wear it to ev

Mt Adams: One of the coolest SOTA activations yet.

Another day, another activation. Heading out tomor

Mt Lafayette activated. Got up at 4:00am, on trail

Heading out tomorrow am (7/25) to activate Mt Lafa