That time I fought the National Park Police 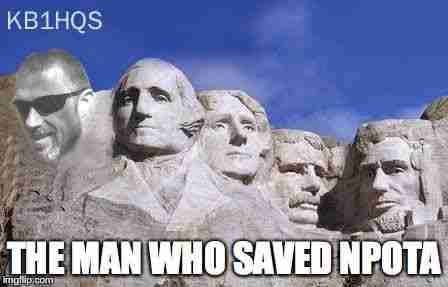 ***Note: all the memes were generated by fellow NPOTA friends

During the National Parks on the Air (NPOTA) event during 2016, I visited many different national parks throughout the US.

During one visit, however things got a little out of hand. 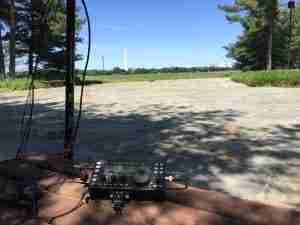 This is what I posted on the NPOTA facebook group page:

Heads up to anyone activating in the DC area:

Park Po-Po stopped by yesterday as I was finishing up my activation at LBJ Memorial Grove and wanted to know what I was doing.

After a polite exchange of an ARRL brochure, FCC and state licenses (No Warrants!), I was informed that operating portable at LBJ is a no go unless approval from HQ was granted. Memorial parks downtown (MLK, Thomas Jefferson, etc) are not allowed and the operator will be told to leave if they are operating there.

**In a Parallel Universe**

In response to this unconstitutional act of aggression and violation of my Bill of Ham Rights, I flashed my official HAM RADIO badge that I keep on my war belt, bladed at 45.2 degrees and yelled, “YOU WILL NOT TOUCH MY KX3!” (this tactic had worked previously at the mall last week).

Utilizing my highly specialized ham vocabulary, I decided to get insider their OODA loop by asking, ” QRZ? QRZeeeeeeed?”

They looked confused and amused at the same time. Perhaps it was my armpit sweat stained “Hams do it with more frequency” shirt. Or maybe my man strength pheromones from not showering for two weeks was overpowering them with my awesomeness. My ham man awesomeness.

My sidekick, T-dog, a highly trained attack dog (who is currently illegal in 23 states, 2 territories and kicked out of four doggie daycares, and winner of the All American Dangerous Breed Show), 30# beagle mixed blood mutt that I bought at the pound for $87, waited intently with steely beagle eyes for the German commands to attack with a hate cursing through him that he usually reserves for the UPS guy. Or so I thought, as he was actually casually lounging under the bench snoring….

Using my SSB DX shouting voice, I barked commands in German to awake the man-devil attack canine. He didn’t stir an inch. Siri, on the my iPhone however did respond, in German asking “wie kann ich dir helfen?”

Considering the only German I knew were commands such as “Sit Pretty” and “another beer please”, I had no idea what Siri was saying.

At this point, I needed reinforcements and I needed them fast. I told Siri (in English) to call the ARRL HQ. The call went through but all I got was voice mail and an offer to renew my membership with an added bonus of the following:

I was getting no where. I briefly considered using the emergency strobe on my HT to signal ARRL, however the battery in my HT has been dead for weeks since I lost the charger.

It was at this point, my wife texted me…

GOOD LORD! WHAT DOES SHE WANT NOW!

Doesn’t she know I’m busy laying down the Ham law? My iPhone is set up to translate text messages into CW (4.2 WPM) so I don’t even have to look at the phone. She texted the following, “Can you please stop by Whole Foods and get some of Organic Gluten & Nut Free Almond milk? The kind that comes in a box. Also I found a pile of dog vomit in the basement this morning, can you clean it up?

One last thing, please call my mother, you forgot her birthday again this year”.

Ugggggghhhh! I didn’t have time to respond because the EMERGNECY contingency plan was now in full effect. (Two is one, one is none, fill in often repeated Retarded Radio Robert saying here).

I grabbed my DeLorme InReach that I keep on my war belt next to my HT, to send an encrypted text to the OM to sell his 23 year old broken MFJ radio (the one he dropped down the stairs last year for that You Tube video he was doing on torture testing radios) at Dayton at full retail price to free up some funds for bail $$ and dog treats.

The Park Police (PP) apparently were threatened by my cool Iridium handheld communicator Star Trek deceive since all they had were crappy P25 Motorola hand me down radios. They moved in for the kill like a pack of hams at an all you can eat buffet after a long sweaty day at Field Day.

I knew how this was going down, I had been in this position once before. A beating with night sticks, violation of my MA RIGHTS! and hopefully a six figure lawsuit with a spot on Oprah was my desired outcome. Maybe she will give everyone in the audience a free ICOM-7300!

At a minimum, I will at least get an award from ARRL for saving the day and defending Hams and their radio rights all over the world.

As the control operator, I commanded in a low primal guttural voice, “You will not violate my constitutional rights! I am a FCC HAM RADIO Operator! When all else fails, you will call me! My FCC license gives me the right to operate anywhere I want, at any time!”

“YOU WILL RESPECT MA AUTHORITY!”

This gave the PP a pause, they didn’t realize the seriousness of this operation. Then I heard uncontrollable laughing…a definite sign of weakness. They were scared. They knew they were up against a true professional bad ass “Operator”, one with 8 confirmed DX contacts all on JT65 at 200 Watts.

I started digging frantically in my bag for my yellow vest with flashing LED name tag and my QSL cards, carefully hiding my 5kW illegally modified CB amplifier that I power off my Rascal Ham-Scooter De-Luxe (illegally parked I may add).

It was then, my Communist Red Star, Tiger Stripped CAMP BOW-O-FENG 8.7W Fisher Price-like HT with the rat tail fell on the soft green grass and broke into 34 pieces but not before giving one last death rattle roger beep. I weep for you, you poor HT. You cannot be replaced (well, maybe for $24 at Amazon).

Like the Matrix and the time at the wedding last summer when I drank too much Jaegermeister, time was slowing down…As my last resort utilizing my gross motor skills learned at Rex Kwan Do, I grabbed my 20′ fishing pole that I was using as my poorly tuned non-resonant 1/4WL vertical with the anticipation of using it as a makeshift impact weapon, 6 radials and all! Indiana Jones Ham Bullwhip if you will. 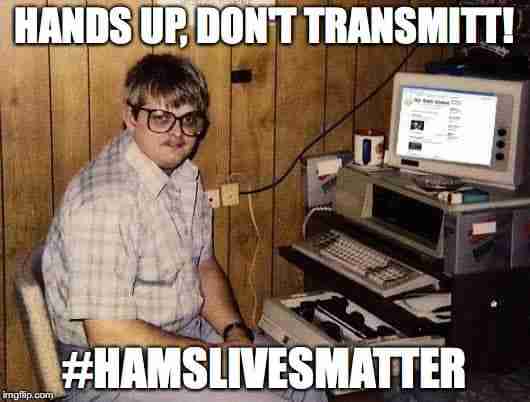 WHAM! BLAT! SIZZLE! The next thing I knew, I felt an earth shattering shock…Could it finally be the EMP that I have been waiting for? Or perhaps I must have hit the PTT button as I was grabbing the antenna. I can SEE THE LIGHT! Who knew QRP RF burns could hurt so bad! Must protect the KX3 at all costs!

This must be the end KB1HQS…SK…SK…SK

Wait, what is that horrible smell and why is my face wet?

I found myself on the ground with a taser barb in my head and my dog licking my face, yet I was still clutching my crumpled FCC license. My last cried were, “I’m calling my lawyer! I know my rights!” 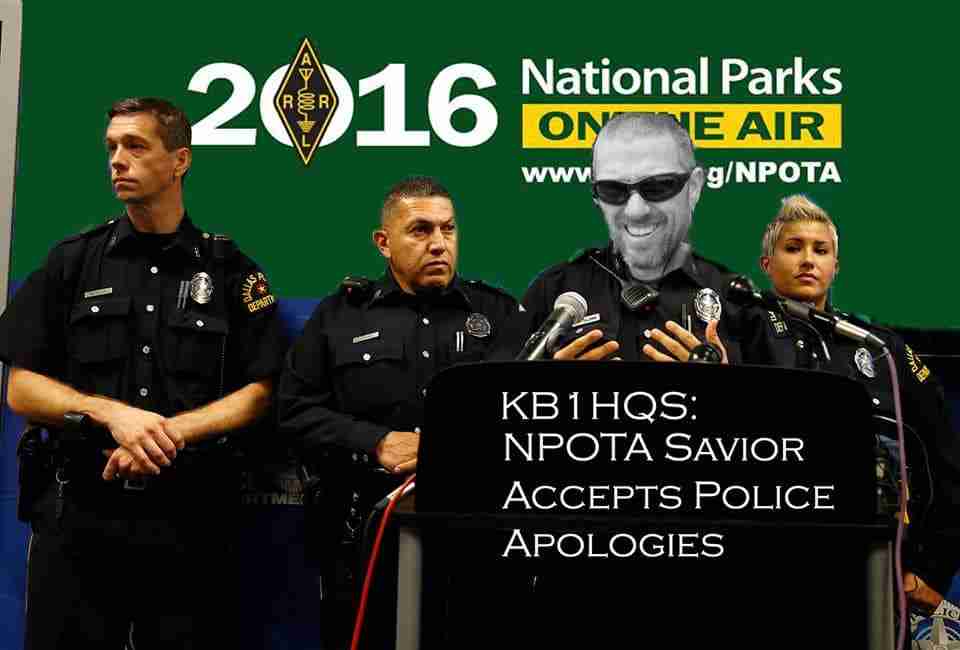 **In a Parallel Universe**

I packed up my gear, got my documents back and headed home. Park police were very polite and professional. I will work on getting approval from NPS.

So for those heading to DC to activate, I would hold off until things can get sorted out. The last thing I want to see is our hobby and niche (NPOTA) get a bad rap with NPS. 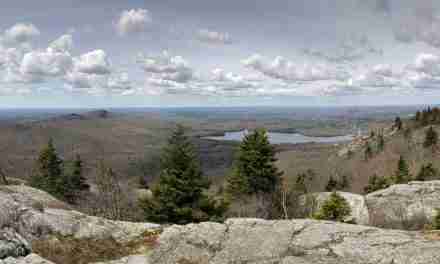 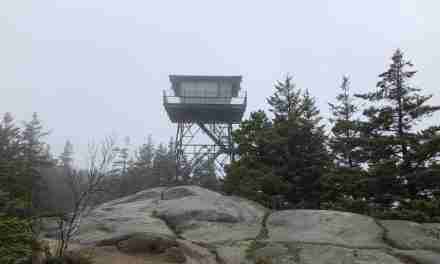 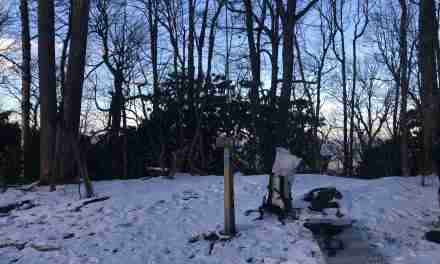 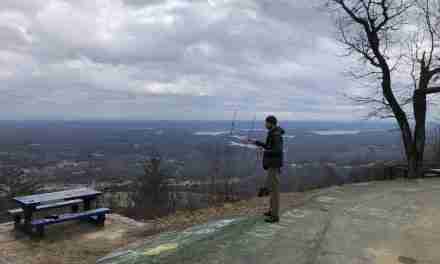